and many other names.

2004  Private and inaccessible for the moment as the figure is mounted in the wall of this former “Sheela na Gig Restaurant” and at present behind a large bookshelf. Also called Blackwater Castle by it’s present owner Ninna Nordstrom, who says that this sheela displayed the Devil involved in sexual games. Religious fanatics vandalized the stone in the past and buried it in the old bridge on the Awbeg River. In 1906 the bridge collapsed after a big flood and the stone was recovered by a priest.
Question??? are we talking about the same stone or another?

Now in 2013 there are many changes in the castle grounds and as to the location of the sheela, just ask nicely and you might be able to see it. 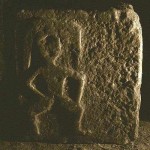 Just out of Castletownroche on the western side is a wooded area with a farm gate, this is in fact the entrance to Blackwater Castle. If you drive into the courtyard you should find someone to assist you.