The actual Castlemagner refers to the ruined Castle on the hill but what you are looking for is the Holy Well on the other side of the river. This is not a sheela but a naked female figure (no genitals displayed) in the orant or praying position i.e. hands to heaven. There is a continuous devotion to this well, as indicated by the cross markings on every piece of the well. There is also a roman soldier(Mars?) on the right side of the well. The whole set up appears to be late sheela in origin…17th century onwards.

I just learnt from Castlemagner Historical Society that the well was covered over in 1771 and that this sheela (the best in the world) was taken from the 8th century church at Subulter, where it lay hidden till 1461, as an excuse for it’s good condition and the figure on the other side is supposed to be the Archangel Michael.
And the other one has bells on it.
The well is also known as Brede’s, St. Brigit’s or Sunday’s Well. 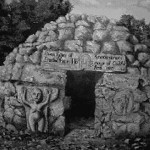 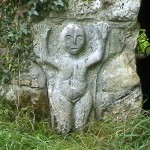 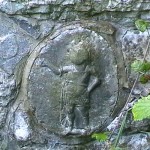 17k NW of Mallow and 43k NE of Killarney

Don’t do what I did and go cross-country, there is an easy path from the gate near the bridge, across the top of two fields and you should find the well in the far corner.