Recently in The Star newspaper, an article on a pagan stone statue which had fertility powers appeared and it showed a couple of the local women who thought that it brought  them good fortune in getting pregnant.
The owners of the stone and also the Ballyknockan Inn, Elaine and Terry Flaherty tell me that they did not know about these powers when they bought it some time ago and it was only after an unexpected flood of pregnancies that they began to think that their stone might be responsible.

As you can see in the photo, the Celtic? decoration at the top and bottom of the stone. This made me suspicious that it may not be as ancient as the article suggested. Coupled with the fresh chisel marks and the symmetrical appearance of the sheela? leads me to believe that this one is a modern copy.
Comparing the stance to other sheelas it seemed to be a mirror image of the Croft on Tees carving with the exception that the lower hand is in a different place. At first I thought it had two vulvas but it was pointed out to me that these are the fingers of the right hand, difficult to decide if the vulva is displayed.
Even though it may not be the real thing, at least it brings the interest in sheelanagigs into the public domain and this can only be a good thing if it encourages the authorities to display these stones in a proper context. 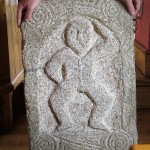 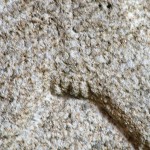 8k SE of Blessington.
Turn off the Blessington road, cross the reservoir bridge, then turn right and after a drive of 10k you will come to Ballyknockan village.
Ask at the Inn for it`s present location