“At Barnahely was found a brown gritty stone female figure, one of these old Fetish figures often found in Ireland on the front of churches as well as castles. They are called Hags of the Castle, and when placed above the keystone of the door arch were supposed to possess a tutelary or protective power, so that the enemy passing by would be disarmed of evil intent against the building on seeing it.”

Barnahely or Castle Warren, is mentioned as being the origin of the rude female figure (above), found in the ruins by Windele in 1914 and now missing. 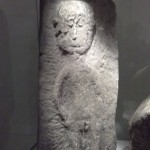