Boa Island is an island near the north shore of Lower Lough Erne in County Fermanagh, Northern Ireland. It is 25 kilometres from Enniskillen town. It is the largest island in Lough Erne approximately 8 km long and relatively narrow. The A47 road goes through the length of the island. This road joins each end of the island to the mainland by bridges leading west toward Castle Caldwell and east toward Kesh. Boa Island features a counterscarp rath (grid ref: H0744 6250) as well as carved stones, graveyard and enclosure (grid ref: H0852 6197), all in Dreenan townland and all Scheduled Historic Monuments.

The Lustymore stone figure was moved here in 1939 from the nearby island of that name A collection of 7 figures can be seen on this site and one was suggested as a sheela but there is some doubt about this.Read the rest of this article on Google. Reading Macallister’s book, Archaeology of Ireland in which he suggests that these figures represent the 7 Deadly Sins sounds to me to make good sense. See if you agree, Lust…the Sheela na gig? Sloth…sitting snugly with his muff.(careful) Gluttony…waiting with his dinner knife at the ready, Covetousness…having borrowed 4 birds, Pride…with his brooch and armour, Anger…was chipped away, possibly too horrific. Envy…peeping out of his window.

All of these figures are not displayed here but enough for you to get the general idea. The only other group of sins that I am aware of is located at Kilpeck Church . This assists the theory that they were designed to educate the peasants on the evils of sin. 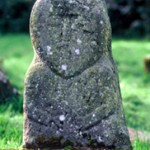 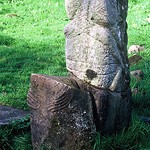