Difficult to make out. Re-Mounted on the bridge at the lower end of town in 1769, as the date overprinted on the figure suggests. It has been damaged by previous owners but enough survives to give it approval. Obviously intended to act as a good luck charm in this case.

Found this report on the web that helps describe what this sheela is all about. “A ‘she-ghost’ haunted the canal bridge of Cloonlara, while it was being built in 1769 and was at last exorcised by a slab, still remaining, with her figure cut on it in low relief and the date. This figure closely resembles the grotesque (and usually indecent) carvings of prophylactic female figures called ‘hags of the castle,’ and now sheelanagigs from a well-known carving in County Cork. The Clonlara figure, if older than 1769, may have been brought from one of the ruined towers of Rinroe, Newtown, and Aharinagh, not far away.” Rest of the article on the internet. 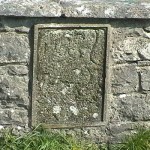 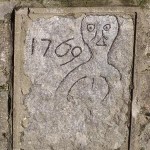 Off the Limerick to O’Brien’s Bridge road.