On the inside of the church and on the bottom right hand side of a Romanesque window.

Visited today and took some photos and impressions which I’ll comment on now. Three carvings in this church are of interest to us but none of them are sheelanagigs.
No. 1…attracts the eye by having a slit at the bottom of the carving, but if you care to notice the feathers and the beak on the bird being attacked by two beasts, it will make more sense.
No. 2…looks like a sheela with a head, 1 breast, arms hanging down to an oval shape and sorta legs. But if instead you see two birds picking the eyes out of a human head, then you are perfectly sane.
No. 3…looks like a rib cage, but could be a beetle. And what is all that hair about?

27/8/04
From Archeology Ireland comes the explanation that the beetle is actually a carvel-built wooden square-sailed vessel, confirming that the monks had proper wooden boats in the 12th century and not just currachs.

Remember St. Patrick was traded back and forth in the 7th century so an away day was no problem for these hard men.

So, no sheelas but an account of how the monks travelled in the 12th century 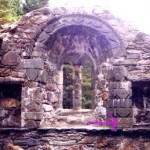 Park at the interpretive centre and cross over the river.
The left hand track leading back towards Laragh and running alongside the Avonmore river will lead you to this church after about 10 min. walk. Where you come upon a fenced off section with new seedlings, one of those gates will guide you to the church.