Removed from the 13th century church in Kilcarne, which is dedicated to St. Stephen, to the present RC church in Johnstown, 1k north of site. This old font has figures carved on it of interest, but those parts have been placed nearer the wall, making identification difficult.
Not likely to be a sheela, but what?

28/7/04
Visited the font today to find it has now been placed on the altar as a baptismal font and giving plenty of access all round. This 800 year old font is very fresh looking and I had to question it’s validity. The font is ringed by the 12 apostles but underneath them are figures of a long haired female head, clerical and lordly heads but we also have these two figures to decipher. One appears to be a lion-like creature licking his balls and the other a human pair engaged in horizontal jogging.
Ergo…not a sheela. 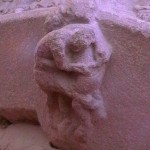 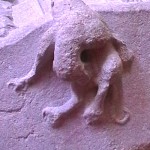