This figure was found in the Chloran area in 1859 and sent to Killua Castle, whose owner was known as an eccentric and collector. In 1869 the figure passed to the Witt Collection of the British Museum and never came back.
Give us back our Sheela!
Quote:- It is known that the core of Killua Castle, which was extensively remodelled and enlarged in the 1830’s, was an 18th century house. The Gothick castle was achieved in the time of Sir. Thomas Chapman, 2nd Baronet, who died in 1837. In that year it was described as his handsome castellated residence, and was renowned for it’s splendid contents. Sir Thomas also built the follies in the park, of which the most prominent is a obelisk on a hillock to commemorate Ralegh’s importation of the potato to Ireland. It is dated 1810. The architect of the castle was possible James Shiel who built Knockdrim Castle in the same county. The Chapman baronetcy is now extinct, although there were illegitimate offspring, one of which was the controversial Lawrence of Arabia. The property was purchased by a Mr Hackett, but when his widow died the castle, lands, furniture and paintings were sold, and the castle was set on the road to ruin. The shell stands today like a colossal folly in the folly-girt demesne.” 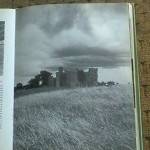 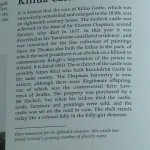