A mermaid and a damaged sheela are depicted in J. Feehan’s book of Slieve Bloom but he says the figures may now be destroyed.

Finally got a copy of the two images and I’m still puzzled over what they are. One is described as a late Medieval mermaid figure but no matter what way up I hold it, I still cannot see it.

The second is probably a little more believable but described as dubious and yet we’re asked, can you see the eye, ear, nose, mouth on the left side of the rib-cage and shrunken breasts, and characteristic exaggerated vulva?
I do hope it is still there because it is certainly worth searching for.

25/6/06
Visited this site today and was surprised with the size of the ruins of this late medieval Fortified House. However despite a thorough search of the area I was unable to find these two carvings and even the owner John Culleton had not been told of their presence.

Newtown House is the far side of the road and you might get more info there. 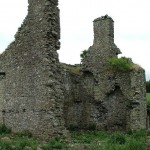 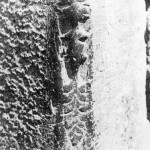 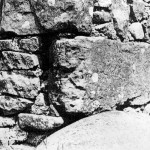