Has a fine figure on the outside of it’s tower about 10m up but quite easy to see.
Founded in the 7th century by St. Cathaldus (Cathal) who, went on pilgrimage to the Holy Land but on his return was shipwrecked on the coast of Taranto, southern Italy, where he was made welcome and stayed until he died.

Revisited this site to check a lead and spoke to Patrick Griffin, who showed me the location of the second sheela, which was discovered by Ed O’Riordan in January 1999. This one is on the opposite East wall, set low down and now visible for all to see.
There was a suggestion that the one on the tower has quartz pebbles for eyes and an ear made of a different stone must be questioned, as all I can see is some white lichen in the eye socket. 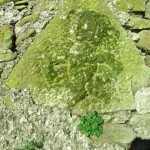 44k S of Cashel and 18k E of Mitchelstown

And 2k west of Clogheen