Following a tip-off from sheela researcher Ed O’Riordan about a promising figure in the library of Lismore Cathedral (C of I) a small party set off in anticipation of finding a new sheela. With the assistence of Dean Beare and the local parish workers we were able to view the stone not realizing that it had been stored here for the last 10 years and came from Tallow graveyard.

This is a medium size stone with about 50% damage to the lower body and has considerable weathering even though it was found buried in the graveyard in Tallow.

The first thing to catch your eye is the unusual hairstyle and although Rahan and Cloghan are close, a character from Buck Rodgers would be a better fit.

The head has no ears but the eyes, nose and mouth can still be seen, no apparent breasts and no vulva present but the remaining right hand is in just the right place to share a common purpose with most other sheela na gigs. Only half of the left arm remains and it could have passed over or under the left leg.

Examining the photos later that day brought up some details that were not apparent on our visit. The body appears to be wearing a bodice with a vertical join down the centre, and those sweeping arms now appear to be clothed also. While the right hand is in the appropriate position, the lack of genitalia is also causing me difficulty in calling this one.

Further examination in good light is required to make an accurate judgement on this one. 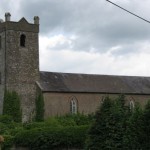 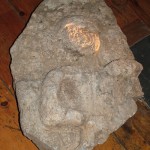 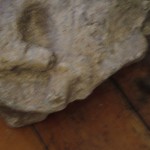 Tallow is 7k SE of Lismore