2 sheelanagigs were built into the coping of the gate entrance wall. One was part of the jamb of a window of the 16th century castle, the other came from Portnahinch Castle.
Moved from this site to a house in the Dangans (Mrs. Fennelly) where they suffered a misfortune with a truck. Both it and the Portnahinch figure were broken as a result and were later used as building material.
Nothing to be seen now.

” The above is copied from a photo taken by Miss Helen Roe, circa 1934.  At that period, it and another similar(?) Sheela stood on the top of a wall boundary of Tinakill House, and  I imagine from the time when the house was being built.  As a young boy my father pointed the two stones out to me and I was disappointed to learn later, they were both taken down when some building work was being carried on at the house. I have been up to the nearby Tinakill Castle many times and could never see for certain anywhere that either of the Sheelas may have been inserted in the old building.  As regards a claim that one of them came from Portnahinch Castle, I think that this is incorrect.  There was never to my limited knowledge, a castle of that name.  However, there was (now a large ruin) Lea Castle in the barony of Portnahinch some miles away, which would have had little or no obvious connection with Tinakill.  On the other hand, there are references to there having been another castle at Acragar, sited between Tinakill and Mountmellick, and there was once a church (The New Commons of Daingans) in this area.  Either of these might have had a link with the second Shella at Tinakill House?  Is or was it unusual to find two Sheelas in the one site?”
One of the librarians in Portlaoise says she will look through their archive material to see if there is a photo or notes of the second Sheela done by Helen Roe. 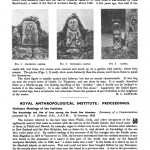 About 5K NE of Mountmellick is the Castle with the Dangans 2K south of it.