Not a sheela but a male saint (with testicles) is to be found just inside this Protestant  church in Ballyconnell. If closed, a key is available locally. Tuaim Drecon was a university site, with schools for Law, Classics, History and in this case Medicine, where the 7th century St. Bricin was a professor. His party piece was trepanation and this is recorded in the carving, which shows a skull in one hand and the tools of his trade in the other.
This figure was found by K.M. Dickie in 1961 near the monastic site of Tuaim Drecon, a few kilometres south of Ballyconnell, where church ruins and a round tower are no longer visible. 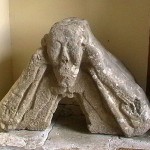 Ballyconnell is 25k South of Enniskillen and 6k west of Belturbet

Figure in church 100yds NW from the bridge at Ballyconnell.